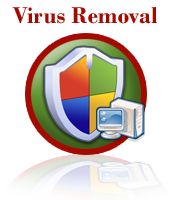 Mindset Computer Repairs Virus Removal, Spyware Removal and Malware removal service. Get rid of all Virus, Trojan and worm virus off your Laptop or Desktop Computer.

We will help you recover your operating system, applications and data. We will also install software to protect your computer from malicious programs in the future.

A computer virus is a computer program that can copy itself and infect a computer without permission or knowledge of the user.

A computer virus, according to Webster’s Collegiate Dictionary, is “a computer program usually hidden within another seemingly innocuous program that produces copies of itself and inserts them into other programs or files, and that usually performs a malicious action (such as destroying data.)” Two categories of viruses, macro viruses and worms, are especially common today. Computer viruses are never naturally occurring; they are always man-made. Once created and released, however, their spread is not directly under human control.